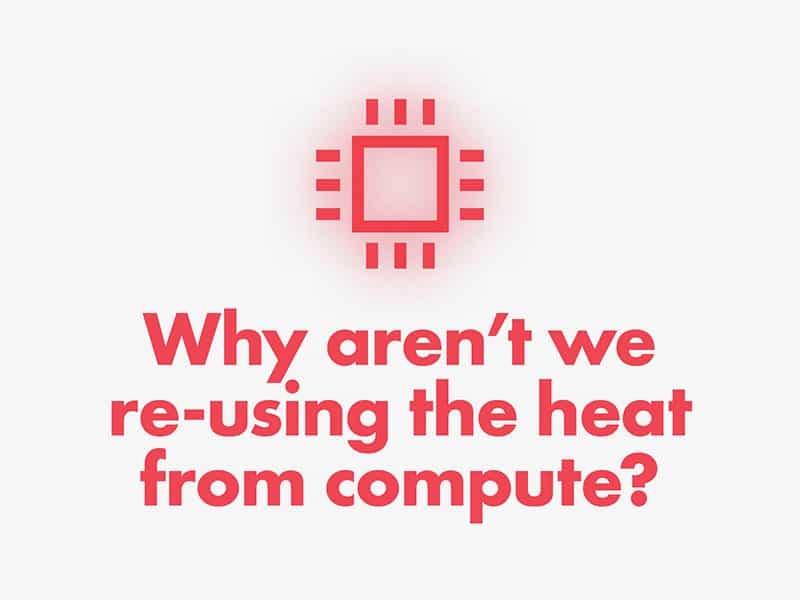 Computer processing underpins our digital world, but generates huge amounts of carbon. All of that processing ends up as heat, ‘waste heat’ to use the industry term. Yet heat is intrinsically valuable. At heata, we believe it should be playing a significant role in offsetting existing heat needs in society, reducing its climate impact and delivering a range of social benefits at the same time.

It’s great to see the growing awareness in society of the importance of the shift from fossil fuels to renewables and electrification, it’s driving change in behaviour from consumers and industry alike.

But data centres are strangely absent when we think of the targets for urgent improvement. Yet in 2018 they generated as much carbon as the airline industry, with a good chunk of the energy spent on getting rid of their waste heat ‘problem’. Since then their impact has been growing rapidly as compute underpins nearly every aspect of our modern lives. 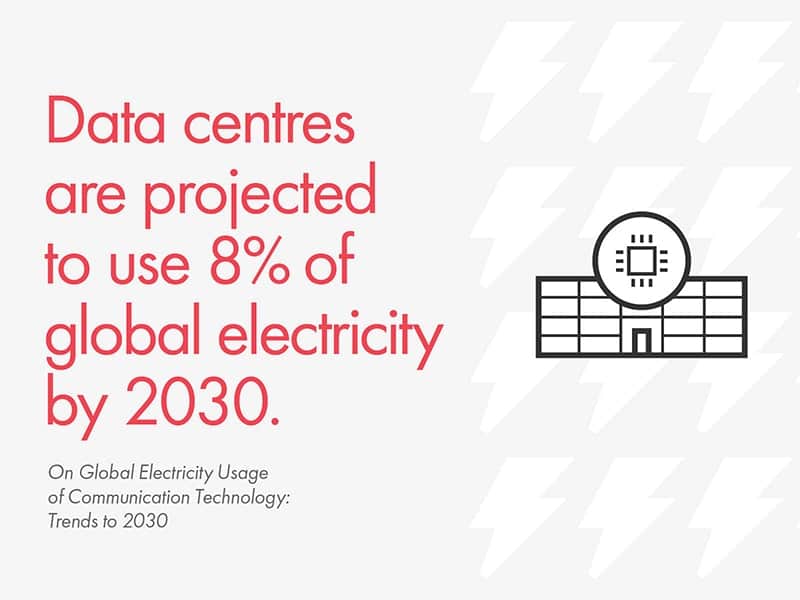 In addition, power hungry data centres are having other undesirable impacts. They’re gobbling up grid capacity, even preventing new houses being built because there isn’t enough power to go round. And in the drive to become more sustainable they’re also hoovering up renewables, which really just shifts higher carbon density use elsewhere.

There are many good reasons to revisit the data centre model but our area of focus is on re-framing waste heat as an opportunity not a problem, and seeing where that could lead us.

To give you an idea of the scale of the opportunity; the waste heat from a typical data centre could provide hot water for 11,000 homes. Whilst the 3d rendering from a 90 minute animated film could provide the hot water for 20,000 homes for a day – something worth thinking about next time you watch a Pixar blockbuster or your children are on a Paw Patrol binge. 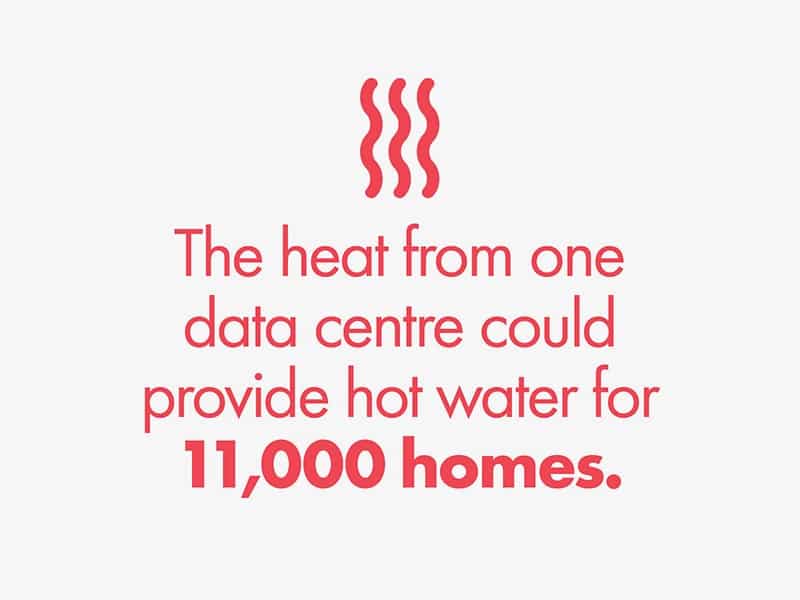 Landfill vs recycling – a parallel?

It’s not that long ago that we threw all post consumer waste into landfill. The gradual shift to recycling and re-use has created positive change and reset society’s expectations of what is acceptable.

“So all those finite materials that you spent huge resources extracting from the earth and shaping into physical things – you just chucked that into landfill?”

With that sort of shift in mind, we don’t think it’s too much of a leap to imagine a future where heat re-use from compute is a given, with the old way of doing things viewed with similar incredulity.

“So the old data centres used around 8% of the world’s electricity, most of which ended up as heat. But we didn’t re-use any of it to help with climate change?…

…and 40% of that energy was actually spent on actively getting rid of it?!?”

There’s a big opportunity to start the journey now. To unlock the value of the waste heat by beginning to intelligently re-use it where we can, with heat from compute gradually becoming an integral part of the heating ecosystem.

Sounds great, but why aren’t we already doing this?

The idea of the ‘data furnace’ has been around for a long time, but the practicalities and state of technology has made it hard to turn into reality. On a very basic level it’s hard to move heat… and then how do you use it usefully, where’s the outlet? The common answer to this question; data centre + heat network, rarely comes to fruition as the infrastructure planets rarely align. Which means you can end up with a data centre full of good intentions, with nowhere for the heat to go.

However, improvements in connectivity over the last five years, and trends towards trustless computing, decentralisation and processing at the Edge, have made a meaningful change to the scope of the ‘how’. Moving heat is still hard, but moving data is now relatively easy. It’s possible to start with the processing, rather than the data centre. For heata, and companies like us, this means we can take the processing to where the heat is needed. That could be into pre-existing heat networks or even further, right into homes and businesses in our communities.

The other key change is that there wasn’t really any imperative to use the energy more wisely. Sustainability is now a fundamental lens through which we view decision making and the pressure to become more energy efficient has become a powerful agent of change. 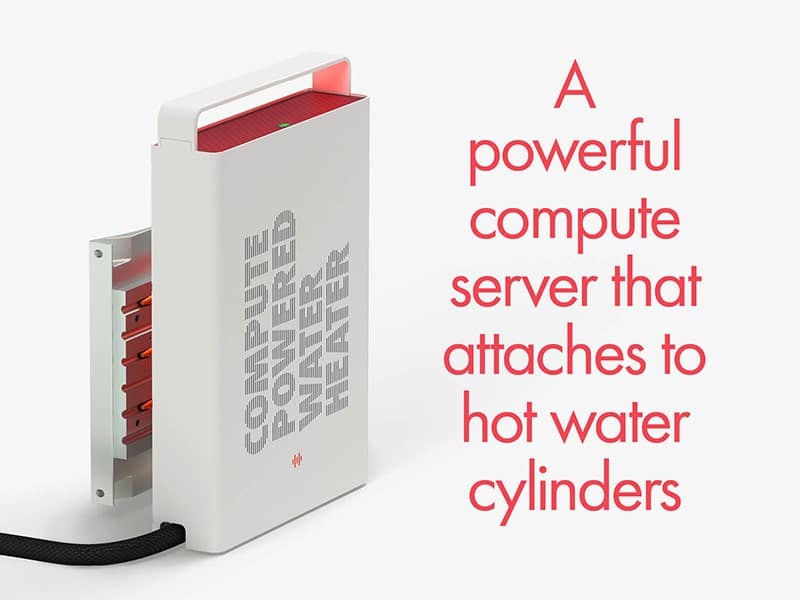 How could the heat be used?

Water is an excellent heat sink, so hot water, needed all year round, is a great use case; domestic hot water, low grade hot water for business and public swimming pools, to name a few. With the beauty being that the hot water is free (or at least greatly subsidised) as the energy has already been paid for, by the buyers of the compute.

At heata, our first target is domestic hot water; there are millions of cylinders out there and the opportunity to offset a significant portion of domestic energy use, and of course help people with their fuel bills. Especially relevant in current times. 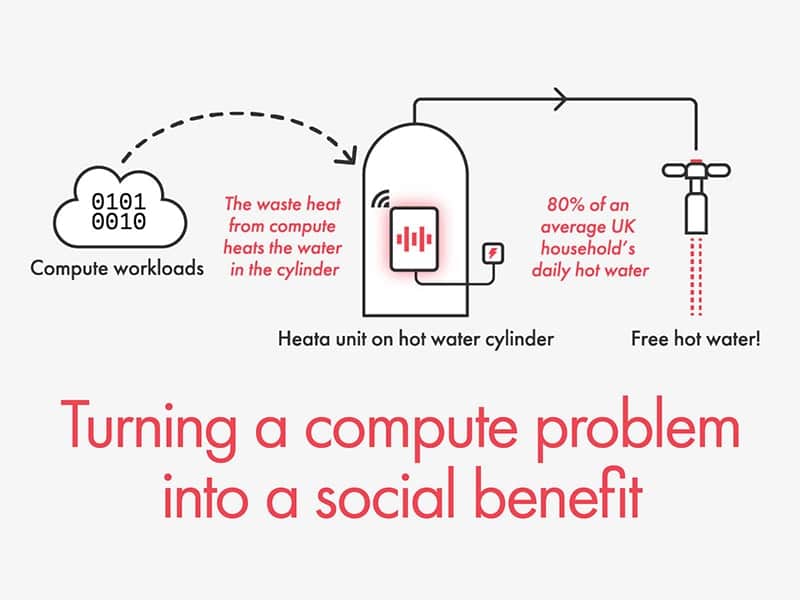 How does heata work and what are the benefits?

In short, our servers (equivalent to a server in a data centre) attach to domestic hot water cylinders and ‘work from home’ on a secure VPN, much like an employee working from home would. They transfer the heat from their processing into the hot water via our patented thermal bridge. And if the heata unit isn’t currently processing the household still has hot water as it works alongside the existing heating set-up, not in place of it.

It’s worth noting that the household doesn’t use the compute, they just benefit from the heat. Organisations who require data processing use the servers, as a sustainable alternative to existing on premises or cloud compute options.

By re-using the waste heat heata can offer significant benefits: 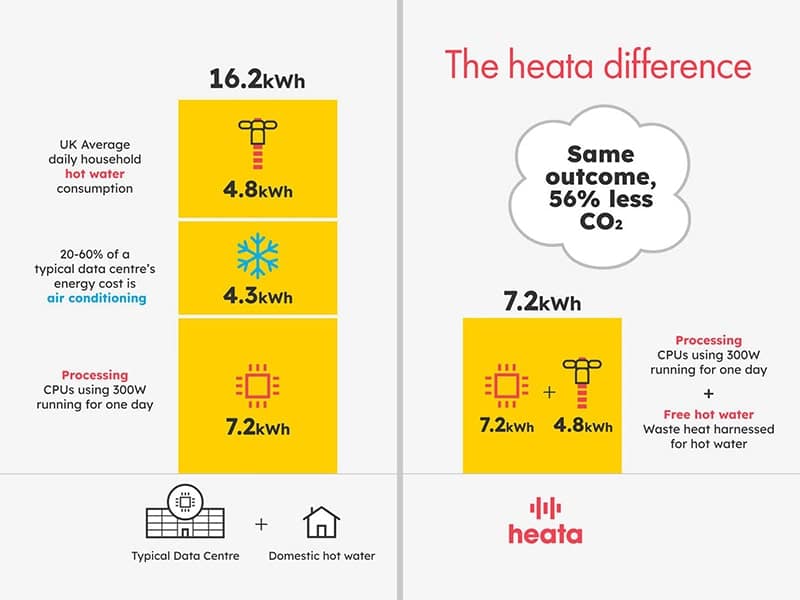 Versus a traditional data centre plus hot water heating, the heata unit uses 56% less electricity and saves 1 tonne of carbon per year at current grid carbon intensity, which is a significant step change in sustainability. And even if all the energy going in was renewable, we’re still using the energy twice and reducing overall demand.

To put this in a data centre context – data centres are typically measured on their PUE (Power Usage Effectiveness). This is: Total Facility Power divided by Power used by IT Equipment. A typical data centre scores around 1.6. With a very efficient data centre sitting at around 1.2. Their goal is 1.

A new term ERE (Energy Re-use Effectiveness) is beginning to gain ground in the data centre landscape. Total Facility Power minus Heat Re-used divided by Power used by IT Equipment. It will be interesting to see how this new metric begins to drive improvements in energy use in the industry. For reference heata’s current ERE is ~0.3, with room for improvement. The new goal is 0. 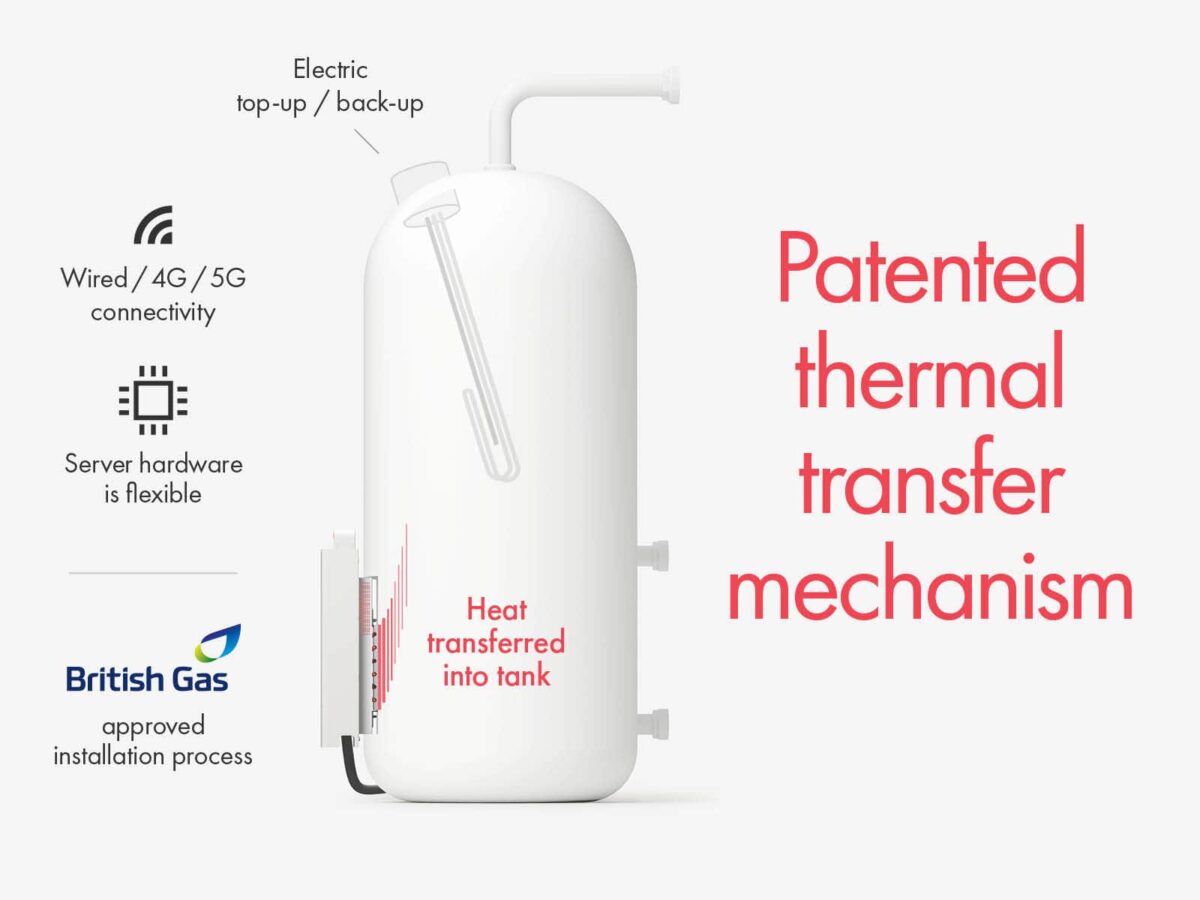 What are the challenges for organisations wanting to use the heata network?

The most significant mental hurdle for a potential customer is trust, the server isn’t behind lock and key in a data centre. And in our case it’s in someone’s home, there’s physical access.

Technically we know that our network is secure; we’re using SUSE’s secure Edge platform which delivers enterprise grade security for just this sort of use case. Industry standard encryption is used throughout and client workloads are isolated from each other, whilst the heata unit itself is inaccessible from the household’s network.

Should someone bypass the physical locks, no client data is stored on the unit and the would-be hackers will only have access to the network’s anteroom, where we vet units joining the network. With access to the main VPN only permitted when the unit has successfully passed security checks.

So we know our security is higher than the now commonplace examples of remote workers on a bank’s or government’s VPNs; but the perception barrier still exists, and like anything new, it will take a while for people to become comfortable with the change.

Progressive organisations will be key to trialling and building trust in the heata network, whilst heata can help them improve their sustainability and deliver social impact, a definite win-win.

If that sounds like you, or you’re interested in finding out if we can process your compute workloads, we’d love to hear from you, do mail us at hello@heata.co

Towards a future with more efficient compute

We’re at the beginning of the journey, and in our view the compute sustainability discussion will shift from a myopic focus on ever more efficient cooling (incremental at best) to viewing waste heat as a hugely valuable resource that we should be using wherever we can.

It’s time to be bold, much like in the early days of renewable generation, when the sceptics argued that the challenges were too great and it could never become financially viable.

If Microsoft can invest significant sums in reducing cooling requirements (along with failure rate improvements) by trialling data centre modules located on the ocean floor, then surely we can direct investment towards re-using the heat for the benefit of society? It’ll take time but innovating now will deliver greater efficiencies down the line.

At heata we’re excited to be taking on this challenge and looking forward to being part of a future where compute delivers the benefits of compute and the benefits of its valuable heat byproduct.

For a short summary of heata, watch this film.

Chris is a physicist by education and (sometimes annoying) nature. Also a Bafta award-winning programmer and very much a practical hands-on maker. Starting his career up in the dot-com boom, he developed the online tracking system for Richard Branson’s round the world balloon attempt, helped develop content platforms at the BBC; moving into physical products, built a company designing and selling geodesic domes, and built his own house along the way. More recently he has been focused on developing products which have a positive impact on the world. Heata is a neat marriage of his skill-sets and he’s very happy it has the opportunity to do some good. 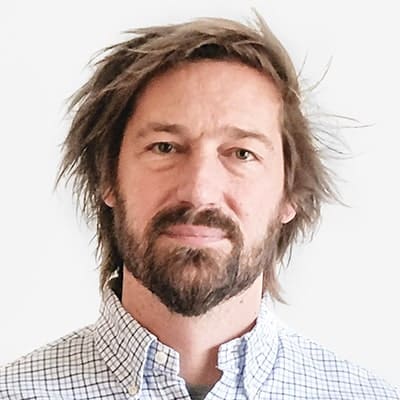 Chris is Co-founder and CTO of heata, a start-up harnessing the waste heat from compute.